The Myth of the October Lull

Cole Penick ruminates on the “October Lull” of deer hunting and makes some helpful applications to the lull many collegiate leaders observe on campus each fall.

The myth of the “October Lull” is held persistently among whitetail deer hunters across the country. The idea is that while it seemed that bucks were in every food plot and on every trail camera for weeks when the early hunting seasons open in October, they are nowhere to be found. In deer camps across the country right now, hunters are explaining away their dry spells by blaming the bucks and trusting their own infallibility. In reality, radio collar tracking studies have shown that deer move more and more as the fall progresses. It’s not that they are moving less than they did in September, it’s that they are moving differently. Good hunters realize that the problem isn’t with the deer but with the human.

A similar myth exists among college ministers. We wisely put lots of energy into the first six weeks of the semester and hopefully see lots of new students as a result, But then October rolls around and the stream of new students dries up. It’s easy to pass this off as an inevitable “lull” that you just has to patiently pass through. But I suggest that it just requires some more strategic work on the part of the campus minister.

Here are three ways to beat the lull on campus (and in the deer woods).

1. Get off the beaten path
As October arrives, deer “disappear” into the woods because their food sources have changed. In the summer they eat grains and greens in meadows and fields but in October they move to feast on fallen acorns under the trees. Freshmen do the same thing. Their first few weeks on campus they stick to public places on campus. All they know is what they saw on the tour. But now that they have had weeks to explore, they are finding their own little haunts and might not be crossing your path. This doesn’t mean that they aren’t still willing to visit your ministry it just means they aren’t near any of your enticements. Like hunters that need to move their tree stands, it might be time to try out a new coffee shop, cafeteria or corner of campus. Don’t expect students to go out of their way to find you if you’re unwilling to go out of your way to find them.

2) Concentrate on cover
When all of the leaves fall off the trees in just a matter of weeks, deer head for deep cover. They feel exposed and become more particular about the paths they take to find food and water. There are lots of new students on your campus right now feeling lonely and vulnerable. College is a humbling experience and too many students don’t handle it well. They might be holed up in dorms or apartments and once again, the burden is on us to go and find them. Make the rounds at the dorms or apartment complexes where your active students live and try to meet their neighbors. We once bought bulk packs of two-ply toilet paper and gave out rolls door to door. There wasn’t a catch or a spiritual hook, it’s just a necessity that few people turn down. You can also reach out to the RAs in your ministry or the Hall Directors to care for their residents that are struggling to connect with others or handle the weight of college.

3) Check the pressure
Lots of movement in the woods, whether from other hunters, leaf-peepers, or hikers might add enough pressure on deer that they will be hard to find. Students feel extra pressure in October too (those pesky mid-terms). But so do campus ministers. It might be that the reason you haven’t had a great Gospel Appointment lately or keep coming up with excuses for the lull is that you’re exhausted. You’ve been putting in long hours for weeks now. An intentional time away could really revitalize your ministry. We plan a family vacation for the 7th weekend of the school year every year. We pull our kids out of school and get out of Dodge. It’s the light at the end of the tunnel for my family as they serve in the trenches with me and a good discipline for me to unplug and get away. Even if you can’t get away, spend some concerted time with the Lord, those you love, and the activities the lighten your load. You’ll come back better than ever and ready to overcome that October lull. 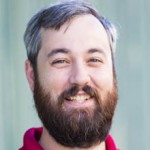 Cole is the Campus Minister for the Baptist Collegiate Ministry at the University of Arkansas. He and his wife, Caroline, live with their four adorable children right in the middle of campus, their mission field. They enjoy family walks on campus, watching and playing sports, making and eating good food, and oh so many books.